Hydro-meteorological Data Projections for Bhutan based on CMIP5 Scenarios 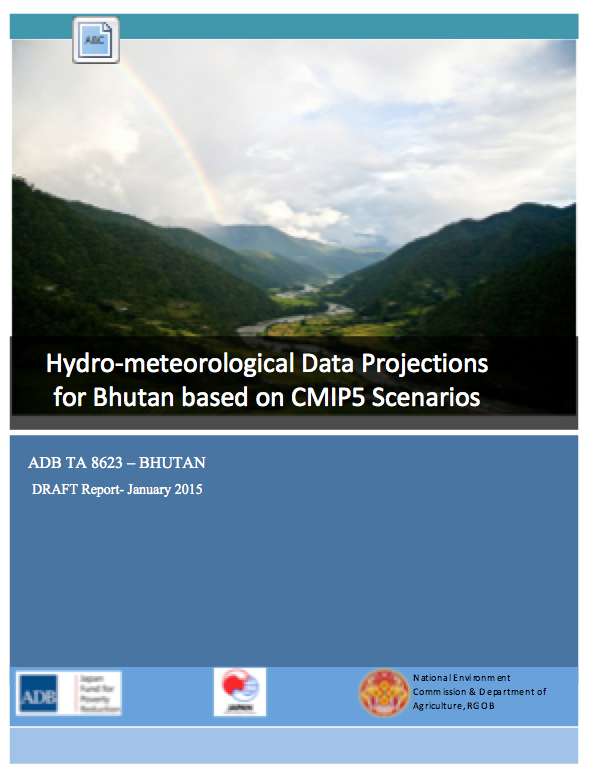 Hydro-climate extremes are critical in considering the possible adverse impacts of climate change and variability in Bhutan. It affects the total runoff volume, infrastructure, aquatic species, forests, hydropower generation, agriculture and more importantly, human lives. Therefore, it is imperative for water resources engineers and planners to consider hydro-climate extreme analyses in their long- and short-term planning. Climate impact research on the water sector in Bhutan is very important for developing a ‘climate-adaptive’ National IWRM Plan, River Basin Management Plan (RBMP) and National Irrigation Master Plan (NIMP). This study involves hydro-meteorological data projections based on the latest climate change scenarios (Fifth Coupled Model Inter-comparison Project (CMIP5)). The CMIP5 model data has been downscaled for Bhutan, and a basin-wide hydrological model (ArcSWAT) has been set up to evaluate future water availability in each basin.

The objective of this study is to assess the impacts of climate change by using a multi-modeling ensemble of four GCMs (i.e., the CMIP5 project database) for the historical period (1970-2010) and future period (2041-2095) on the hydrological regime of Bhutan’s rivers. The study conducted bias correction of GSM (CMIP5) data using a statistical downscaling model for river basin modeling and by setting up a hydrological model for updating the hydro-meteorological data projections based on the latest climate change scenarios. The climate data record for Bhutan is limited, e.g. the observed precipitation data is only available from 1995 to 2013 for a few stations. Due to these limitations, this study used Asian Precipitation Highly Resolved Observational Data Integration Towards Evaluation of Water Resources (APHRODITE) data. The APHRODITE project created a grid to record daily precipitation with a high resolution 0.5° over the entire Asian domain.

For this study, 21 grid points covering the whole of Bhutan were identified. Daily rainfall and mean temperature data from 1976 to 2005 were extracted for all of these stations. These data were considered as observed historical data for this study. Bias correction using the empirical quantile mapping method was applied to climate input data provided by the GCM. Based on the correlation coefficient (R2) values between bias-corrected GCM and the APHRODITE monthly datasets for average temperature, most of the grids in Bhutan show a very good correlation (0.94) for the period 1976-2005. Similarly, the R2 values for precipitation for most of the grids also show good results.

The hydrological study analyzes multi-model precipitation extremes over Bhutan for historic (1979-2013) and future (2040–2099) climate scenarios by using the CMIP5 simulations data. The simulations of daily data from four global climate models (GCM) have been used. This study assumed a constant atmospheric CO2 concentration within SWAT throughout all model simulations. The effect of CO2 on plant growth and transpiration, and thus ET, can be significant or moderate for highly vegetated watersheds. Therefore, the decreases in stream flow and hydrologic components are assumed to be conservative estimates and would be higher than if modeled with the effects of CO2. Additionally, SWAT has a simplified groundwater algorithm where groundwater contributes to stream flow only if the water stored in the shallow or deep aquifer exceeds a specified water table height.

The SWAT model was simulated for the predicted future climate for 2055 to 2090s under both RCP 4.5 and RCP 8.5 for BCC-CSm1-1 and CCSM4 GCMs. It was assumed that there is no land use change in the study area. It is also assumed that the wind, solar radiation and relative humidity remain the same as in the base period. Hydrological model results for stream flow at the outlet of each catchment have been aggregated to mean annual values, i.e. the average of each day of the year for every year. The glacier-covered areas of the model are treated as constant; from the simulation result, the average basin yield will increase from 5% to 56% during the period 2055-2095. This increase in yields results from an increase in both precipitation and temperature. Due to higher temperatures, the snowfall amount decreases significantly, shifting the permanent snowline to higher altitudes. Base flow during the dry season will increase for all of the future periods under both the RCP 4.5 and RCP 8.5 scenarios. With CCSM4, there will be a shift of flow pattern by one month. The peak will shift from August to July, which is due to the shifting rainfall pattern projected by CCSM4. There will be an increase in peak flow during July and August. The overall water availability changes are shown in the table below. correlation (0.74) for that period. The bias analysis shows that GCM data strongly overestimates the observed